Congratulations to the 10 finalists in the Beneful® WagWorld® Dream Dog Park Contest!

To celebrate the relationships people have with their four-legged best friends, the Beneful® brand has created the WagWorldTM Dream Dog Park Contest – in which they will award a $500,000 makeover to one lucky dog park!

Contestants entered 2 minute videos about their dog park, in which they show their local park, and describe their Dream Dog Park.

Limit one (1) vote per person, per day. WagWorld.com registration required.

To Vote:
•Review the Finalists’ entries
•Choose your favorite
•Go to your favorite Finalist’s page and click “Vote for this Entry!” You can only vote once per day

Marley's favorite park is one of the finalists and we encourage you and your friends to vote as often as possible.
Posted by Monica Marley's Mom at 12:13 PM No comments: Links to this post

Our new instructor is adamant Marley needs to master some foundation skills before we re-introduce any equipment. We have been working on position, recalls, walking, pivoting and crate skills. It has actually been very fun. We are doing very well with anything that requires Marley to be on my left side. The right side just seems like the wrong side, it is a struggle for us to remember the right side.

Whenever Marley gets confused or tired she begins to fight any work on the right side. At that point she is just insistant on staying on my left. I've been working at keeping our training sessions short and breaking all activities into smaller segments to avoid any confusion.

I've discovered I need to keep a training journal of sorts and keep track of the exercises we do and what we need to improve. I've searched on-line and I have not been able to find a training log book. I think I should just create something, except I'm not quite sure what I should include. If anybody has an example of something they like or a site that provides that information, I would really appreciate it.
Posted by Monica Marley's Mom at 9:11 PM No comments: Links to this post

Email ThisBlogThis!Share to TwitterShare to FacebookShare to Pinterest
Labels: agility

It is too easy 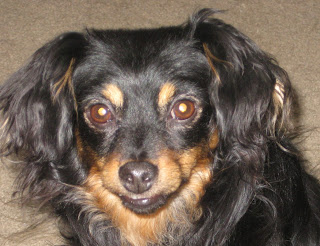 The other day I decided we needed a leather leash. This led to an entire day of shopping. It seems leather leashes are not very popular and if they are in stock they weigh almost as much as Marley.

After a day of hitting every pet store, pet boutique and feed store in town we were both exhausted. I picked up a gingerbread man treat for Marley at the treat bin and gave it to her as soon as we were back at the car.

As soon as I settled into my seat I noticed a clump of grass on the passenger seat. I reached over to remove it and time froze. As soon as I touched that clump of grass I felt Marley freeze and I realized my hand was between two pieces of her ginger bread man treat. She didn't growl or attempt to snap at me, she just froze and paid attention to my behavior. I removed the clump of grass and we both let out a deep breath as time resumed its normal speed.

At that moment in time I realized how easy it is to have dog/people misunderstandings. Children are especially careless with food and messes and I can totally see how misunderstandings can occur. I am very happy I have spent so much time working with Marley and she expects me to provide high value treats otherwise this situation could have easily had a very different outcome.
Posted by Monica Marley's Mom at 9:17 PM 1 comment: Links to this post

I expected to be devastated by letting Mahone go; however I was totally taken aback by Bob and Marley's grief. Bob has been cuddly and refused to be more than 4 feet away from me at any time; normally he is very aloof and while very curious he does not feel the need to interact with me regularly. He has also become very vocal, meowing and chirping as he follows me around.

Marley seemed to realize Mahone was missing at dinner time. She was looking around for Mahone when I called her to dinner. She ran into her crate and stared at Mahone's food bowl spot. She lightly whined and refused her dinner and breakfast. On our walk she didn't spend much time sniffing and she kept a close eye on me. I tried to entice her to play and she refused, she just looked away and sighed. 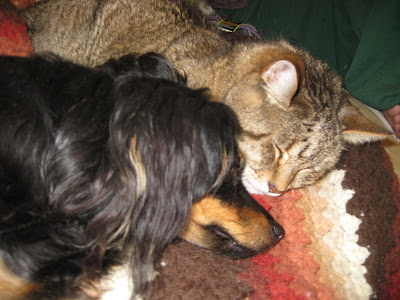 This is my favorite picture of my two troublemakers.
They spent a great deal of time sleeping together and following each other around.

It seems very easy to find books that refer to human grief at the loss of a pet; however, I have not found anything that addresses the grief other pets feel at the loss of a friend. I've totally been taken aback by the level of distress they seem to be feeling. I'm sure many people will say they are reacting to my grief; however, I think they actually notice Mahone is missing and they are grieving. I'm not sure what I can do to make them feel better.
Posted by Monica Marley's Mom at 8:47 PM 2 comments: Links to this post 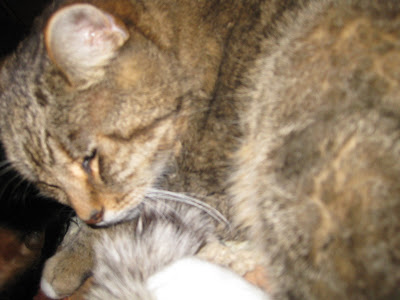 For the last 18 years Mahone has taken great care of me, he ensured my feet were never cold, he saved me from having to eat any peas and he was always ready to listen. I first met him when he was a few days old and his head was twice the size of his body. He came to live with me when he was six months old and the first thing he did was bite me and proceed to fight with the other cats in the household.

Mahone had a lot of wonderful traits, however he was just never very bright. It took him a year to figure out I had a purpose besides giving him baths. It took him another year to realize he liked to be cuddled and laps were fun places to hang out. He was always very accepting of any other pets I brought home, especially my blue betta.

Mahone assigned himself a few jobs that I enjoyed such as foot warmer and pea eater; however, he was also an official boyfriend picker. I'm not sure when he assigned himself this job but it was most annoying, basically if he didn't think a boy was worthy of my attention he began to mark (yep, pee on stuff that didn't belong to him) the boys possessions. Given a choice between cleaning up cat urine or fining a new boyfriend...well Mahone always won.

He had excellent recall skills and had I discovered clicker training earlier, I'm sure Mahone would have had quite a few tricks up his paw. He used to play fetch until he became 5 years old and the thought it was dumb game. He had the loudest purr I have ever heard, he would sit in my lap and people could hear him purr over the phone.

Mahone was not particularly athletic, he prefered finding the best nap spots. I always thought "had he been a person" he would have been the high school jock, who scored 5 touchdowns in a single game and now lived for his tv and beer while reminiscing about the good old high school days.

We loved Mahone and he is greatly missed.
Posted by Monica Marley's Mom at 10:47 PM 3 comments: Links to this post 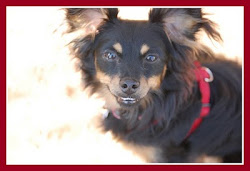 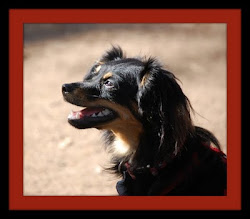